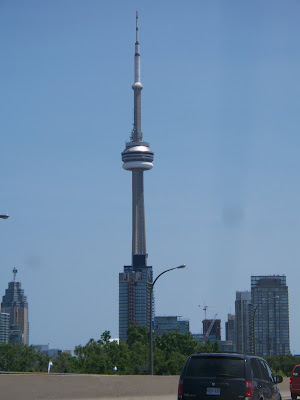 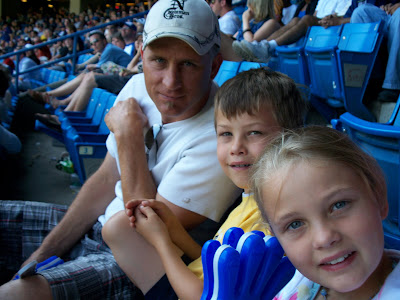 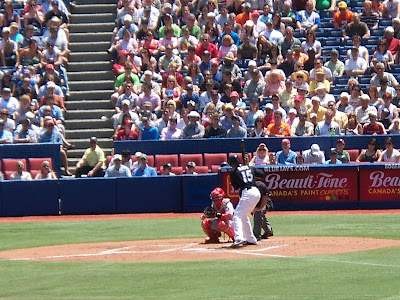 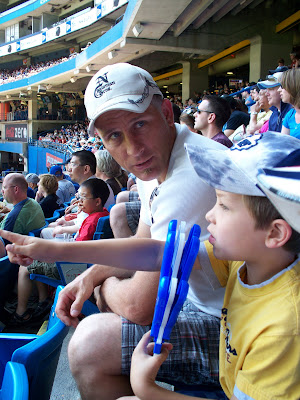 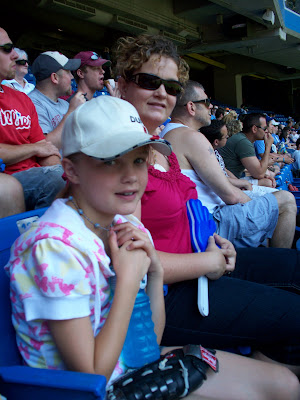 The idea of going to the Roger's Centre to see the Bluejays play baseball was a very exciting idea!
Watching them loose 10-0 without many hits at all was a great big bummer (quoting Steve).
BUT, the day was gorgeous, the atmosphere fun (mostly :) ), the traffic horrible, the junk food great and the experience wonderful! Overall, a very successful day!
Maybe we'll go again and hope for a more successful game (and Haladay pitching??)
Posted by Lisa at 8:33 PM No comments:

We had a mish-mash of a Saturday...literally!
Although it rained, we had a lot of fun doing things like... 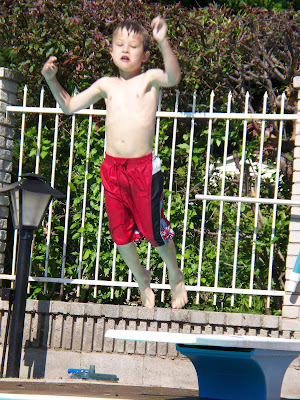 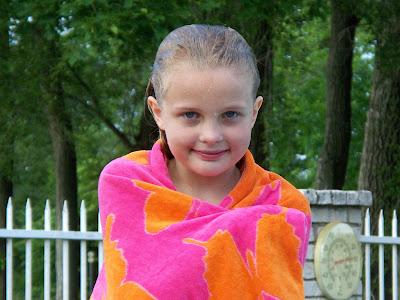 The weather was gorgeous! 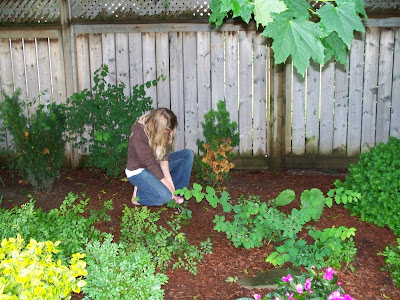 Sara had the joy of pulling teeth weeds in the garden. The pulling of the teeth was getting her to do it! 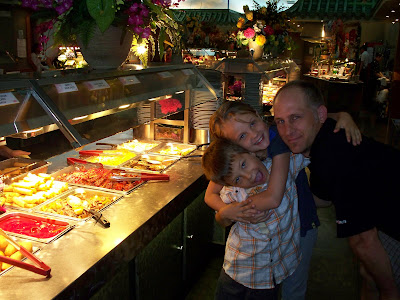 Connor's birthday lunch at the Mandarin. Someone introduced these kids to the Mandarin and now it is their restaurant of choice for their birthday dinners out. I wonder why they love it there so much?? (Hello, can you say All you can eat dessert? These are my children, afterall!) 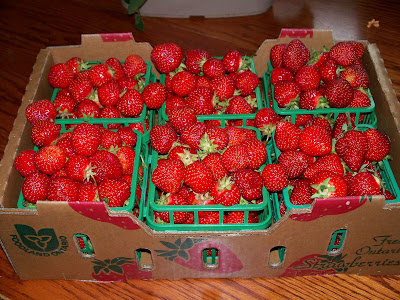 Fresh strawberries for our homemade strawberry jam.
A good, restful, yet productive weekend! 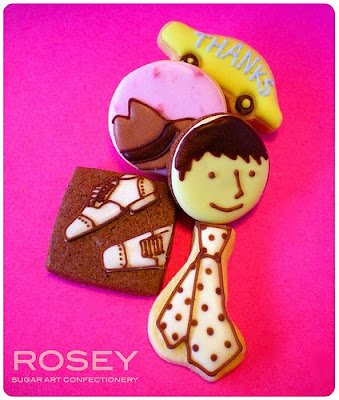 He didn't tell me how to live;
he lived,
and let me watch him do it.
~Clarence Budington Kelland
Just as I have been blessed with many mothers in my life, I have been blessed with many awesome fathers, too. Today we pause and thank God for the men who have shaped our lives.
Dad is currently on a wonderful cross Canada trek in his home on wheels. Steve, the kids and I are going to spend Father's day at his uncle and aunt's pool celebrating the gift of all the V family fathers. We also send our love out to Tom on Father's day and wish him a wonderful day, too!
Thank you to all the fathers who have blessed us and continue to do so each and every day! We are glad God has place you in our lives. Hoping you all have a wonderful day! Here are some of the fathers we love so very much, last year at the cottage: 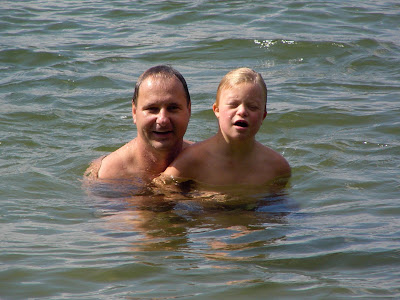 Tom and Ryan, enjoying a good "toss Ryan in the air" session. Tom has the great ability to encourage his boys to explore and learn. He works very hard to do what is best for his boys and is doing a great job with them! 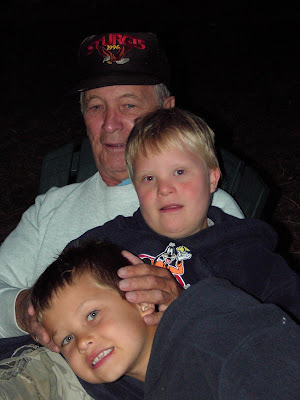 Opa, Ryan and Connor at the campfire. Opa is a selfless giver and loves to spend time spoiling and playing with his grandkids. Dad would give anyone the shirt off his back if he needed it. He is generous in spirit and nature. Have a great day, Dad! We miss you! 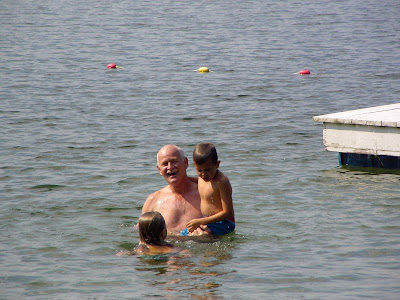 Pake will do anything to get a laugh from his grandkids (or kids). He also has a generous and giving nature and does so much for all of his family. He also loves to keep things fun with his wildly embellished interesting stories. We love you! 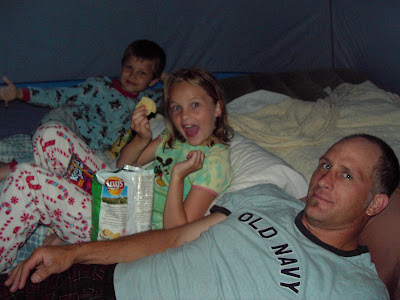 Steve is a hard working dad who has the best interests of his kids always in mind. He loves to do fun things with his kids and will sacrifice to make things happen. Have a great day! We love you!

It's hard to believe that our little guy is turning 7 today!

Connor is such a joy to know. He has such a sweet personality. He loves all things sports and academics. He is the Wii MarioKart champion of Niagara, if not the world. He is a kind and sensitive soul. Our lives are so much richer because he is our son, grandson, brother, cousin and friend. 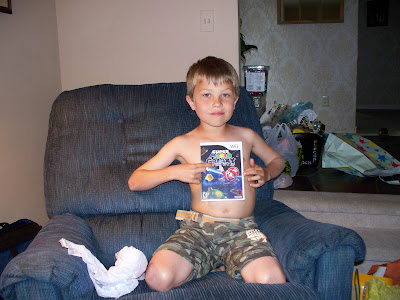 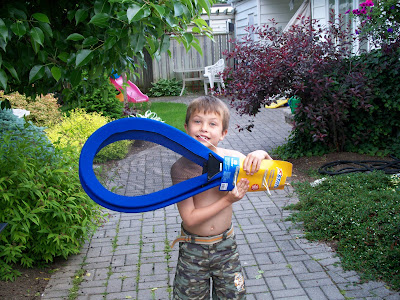 He loves to play any kind of sports. Here are some new Jumbo tennis rackets. 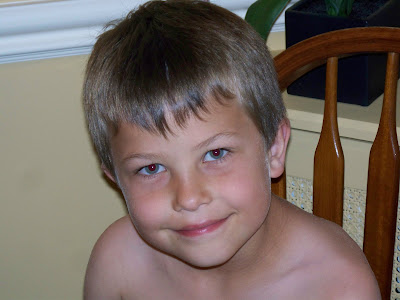 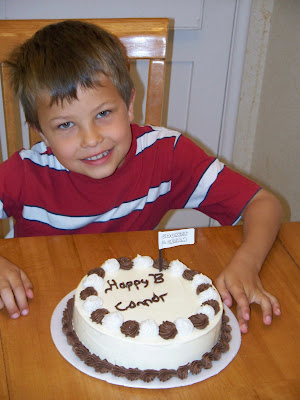 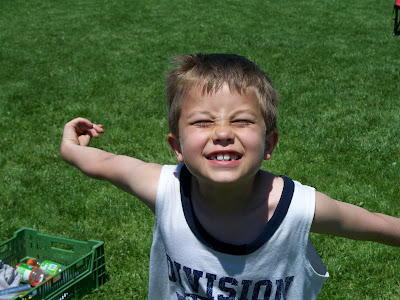 Connor on track and field day a few weeks ago at school. Would it be bragging to include that he broke some track records that day? He now holds the record for the 800m run, triple jump and sack race (is that an Olympic Event?)
PS: Don't forget to read our post below to see what else we've been up to this weekend!
Posted by Lisa at 12:00 AM 1 comment:

I've been a bad blogger lately. We have been so busy with first illness and then day to day spring/summer busyness, that I feel that I haven't had enough time to sit and write a proper post. Before you know it, a month has gone by, and then there is too much to say. *Sigh* The vicious cycle.
However, I will leave you a snapshot of the highlight of my weekend, with a promise to return and update soon.
Anyone recognize these two? 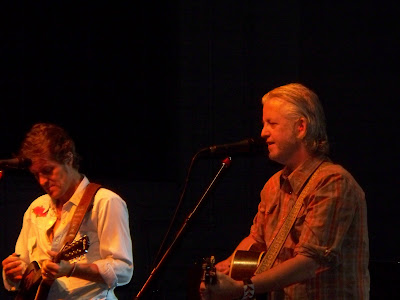 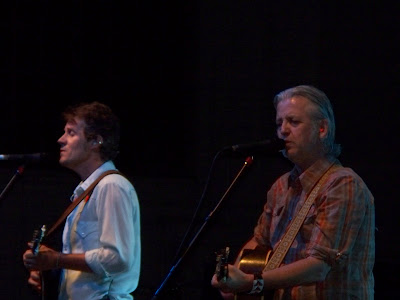 Grace Between the Lines

This blog was started by my sister, Annette, to keep everyone updated on her journey with cancer. She named the blog "Bump on the Road". Annette's cancer was taken away forever on December 16, 2007. This blog continues in her memory, with a new name, Grace Between the Lines by her sister, Lisa.

Visitors to "Grace Between the Lines"